No Red Bull Drive for Raikkonen, No Dream Team, Rats!

I have for the most part stayed out of the Kimi Raikkonen to Red Bull conversations, predictions, and general musings. However, quietly inside I was hoping that come the end of summer break the news would indeed be that Raikkonen had signed for the team from Milton Keynes.

However, this is not to be. Monday morning I read this headline; Confirmed: Raikkonen will not join Sebastian Vettel at Red Bull in 2014. So, no dream team at the Austrian outfit that has claimed three driver titles and is on track to make it four.

Most people that had any real sense of the matter quite correctly suggested that the pairing of Raikkonen and Vettel was never really going to happen although at first glance it did seem very exciting.

The claim of these experts and quite a few bloggers’s was that Red Bull did not want to destabilize their star driver in addition to invalidating the young drivers program that Red Bull has invested quite a few energy drinks in. That is a euphemism for dollars everyone. Lots of them.

There have been no real details of what actually happened. One headline I read stated that talks broke down, but what does that really mean? Did Red Bull call it quits or did Raikkonen say thank you very much, but that is not the type of deal that I can agree to? Maybe both parties were just too far away from the center to make it really work. Who knows? All I know is that one of the most dynamic pairings possible from the current crop of F1 drivers will not come to fruition, and that makes me sad. 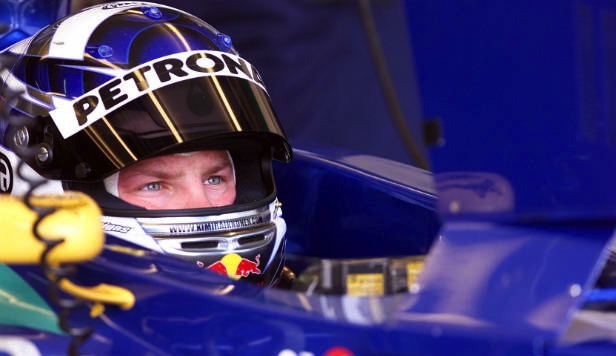 Here is Kimi in a Sauber. Peter knew a good driver when he saw one. Don’t forget Peter Sauber gave Michael a drive in GT.

Of course a dynamic pairing could easily turn into a volatile pairing and I’ve already written a post about how that can ruin championship hopes. So maybe it was Red Bull management that got cold feet. As the saying goes if it is not broken…and in that Red Bull more than likely made the correct choice for the team.

On the other hand, was this the correct choice for Vettel and his legacy? Yes I know, his legacy is doing just fine with 3 WDC’s and a fourth in the making. At twenty-six maybe a fifth or a sixth title, but until he drives alongside an Alonso, or a Hamilton, or a Raikkonen, or for that matter can win in an uncompetitive car there will always be a question mark. Unfair as it might seem, Vettel’s detractors (and there are many) feel his success has been largely due to Adrian Newey’s design brilliance, not Vettel’s driving skill.

Personally I don’t quite agree with this analysis, I think Vettel is a brilliant driver on a truly great team and this is a team sport. Vettel has done an outstanding job these last three years and as Alonso has stated deserves to be where he is. But is he a better driver than Alonso or Hamilton or Raikkonen? The three well-deserved titles don’t exactly answer that.

For Vettel to truly be considered one of the greats he has to either drive alongside someone of equal caliber and win or take a not-so-great car and make it a winner.

I’m not going sugar coat it, I am a Vettel critic and my interest in Raikkonen driving for Red Bull lies in discovering if Vettel is really as good as he appears, as good as everyone says, as good as his fifty-three pole position, his eighteen fast laps, his thirty race wins, his three driver titles. Now that I write it all down, it looks pretty good actually. But maybe it is just the car. Anyway. Mark Webber is a very, very good driver, but he is also inconsistent and just a little bit slower and in the world of F1, 100ths and sometimes 1000ths of a second is becoming the difference between a great driver and just a good one. As much as I like Webber and think he is a truly good driver, he is not enough of a challenge to Vettel.

Ron Dennis knows a good driver when he sees one too and pouched Raikkonen from Sauber. Here Dennis is telling Kimi thank you for winning the  GP of Japan back in 2005, from P20…

Even if Webber was an equal driver we would never know because the team many times supported Vettel at Webber’s expense. As Mark said in an interview with Andrew Benson about his title challenge in 2010 “They [Red Bull] didn’t really put it on a plate for me now did they?” Christian and Vettel can say all they want about equal treatment and such but the truth is clear to anyone paying attention. This is just a line that Red Bull uses to appear fair, the reality is that they favor Vettel.

I wonder if Vettel would even want a strong driver to go up against in the same car? All drivers say it does not matter who their teammate is, but I suspect that is not the entire truth of the matter. Clearly when Michael was at Ferrari he only wanted drivers that would agree to pull over. It was one thing for Vettel as a rookie to come into the Red Bull team against the veteran Webber, for he had nothing to lose, everything to gain. Now that five years have passed, and Vettel is the big man on campus with three championships, I don’t think he would feel like he has the Red Bull wings if Raikkonen, a challenging driver, came in and upset that apple cart. To be fair I wonder if any driver would.

Lets take the driver that I favor, Fernando Alonso as you all must know by now. He has also said he has no concern who his teammate is. I am just a bit cautious to believe that. Make no mistake, I believe he is the best driver on the grid, and on race day and at the end of the year would out drive any teammate, but I also believe he would rather not have to deal with a more competitive teammate than say Jenson Button or his current one Felipe Massa, who both are really good on some days but not so much on others. Maybe it’s due to his bad experience at McLaren, when the team favored Lewis Hamilton. But still I think this hurts the Alonso legacy but then again I am just a blogger. Maybe he knows better, ha ha.

Lewis Hamilton is an interesting case study. He has gone up against the likes of Alonso as a rookie and it is safe to say was equal and just a hair better than the double world champ for that year at McLaren. He comprehensively beat Button, another world champion, two out of three years while they were teammates. Most recently he has started to outperform Nico Rosberg and looks very strong as the season moves into the second half.

Not winning a championship at McLaren Raikkonen move to Ferrari which indeed yields the Finn a Drivers Title. But the duties at the Scuderia were not idea for the party animal. Raikkonen is bought out of his contract a year early to make way for Fernando Alonso.

I’m of the opinion that Hamilton would not only have no problem with another star/champion in the team, he would lobby for it. He knows there’s no better way to prove to everyone that you are the best. Isn’t that what all F1 drivers, hell, all race car drivers think about themselves anyway? The real trick is getting everyone else to think that as well. All Lewis’s legacy needs is more driver’s titles really, and he just might be able to make that happen at Mercedes.

Raikkonen is another driver that I believe really and truly couldn’t care less who is on the other side of the garage. I get the idea that he wasn’t intimidated by Michael’s seven world titles and if he had gone to Red Bull wouldn’t have been bothered by the obvious favoritism toward Vettel that he would surely have noticed. Kimi would have been “I know what I’m doing” personified, just get on with it and “Just let me drive.”

Don’t buy the hype that Raikkonen would have destabilized the team. Remember Raikkonen is not political, Vettel admitted as much himself when asked about Kimi vs. Alonso and who he would prefer as a teammate. Vettel very carefully said in a few words, with Kimi there is no Bulls**t.

Plus I don’t see Raikkonen’s goal in F1 the same way I see it for our three other protagonists. Vettel, Alonso, and Hamilton are all desperate to be considered the best of this generation of drivers in F1. With Raikkonen you get a sense that he just loves to race, loves to go fast, loves the challenge and if race wins come and yet another championship, that is fine too. 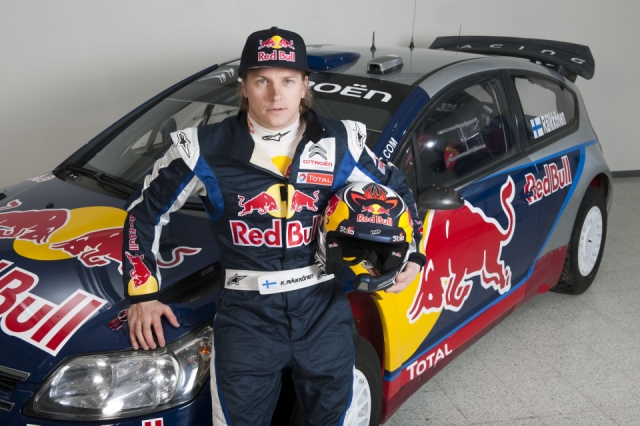 Raikkonen has in fact already driven a Red Bull, just not the one was I hoping for. Oh what could have been…

I am not minimizing his desire to win at all, but it appears his motivation comes from a different place than that of his peers, and this is why Raikkonen would have been a great choice for Red Bull and equally a real challenge for Vettel, and what Vettel needed to prove that his success is not due to Newey.

Of course all drivers would love to have an Adrian Newey penned car right now, no matter what anyone would say about it. Quite frankly I wish Alonso was driving one and had the same problem of credibility. Winning is winning. But what better way to silence your critics once and for all than by out-racing another driver such as Kimi Raikkonen in the same car? This effectively takes the car issue off the table and now we are really comparing apples to apples.

Throw into the mix that Raikkonen is easy going and as earlier stated not prone to politics, and I think Red Bull missed the boat on this one. There are several other reasons Red Bull should have signed Raikkonen up, but sticking with just the issue of Vettel’s legacy, if he went up against Raikkonen and come out on top at such an early age, the golden boy could have finally shown everyone that it is not the driving of an Adrian Newey chassis but rather his own driving skill which has made him world champion. That is the kind of legacy that is everlasting.

-jp- (and what did you say, Kimi’s going to Ferrari? Say it isn’t so, can’t have my driver destabilized.  lol)

← Felipe Massa’s Time Has Come And Gone. Time To Move On
From The Editor Re: Missing Blogger →

2 Comments on “No Red Bull Drive for Raikkonen, No Dream Team, Rats!”