Hamilton, The Safety Car And Payback

Well it didn’t take too long did it? I thought it was going to be more towards the end of the season. Then again, the Safety Car was the perfect opportunity. What am I referring to, you ask? The Payback of course. Payback for what? The payback to Nico Rosberg for holding station and not racing Lewis Hamilton for the final step at the Malaysian GP. This allowed Hamilton to record his first podium as a Mercedes driver and the Team’s first podium of the season.

Now right about here I have to tell you I believe in Aliens, Black Helicopters and Conspiracy Theories. And yes, I was an avid X-Files fan. So don’t hold it against me when I say that Ross Brawn engineered the perfect coup to win the Monaco GP a week ago. It is not a secret, the commentary team of Leigh Diffey, Steve Matchett, David Hobbs, and Will Buxton, said Brawn did as much. And it is not as though there really is a conspiracy against anyone in particular. It is just that there is probably a little more to the story than meets the eye. 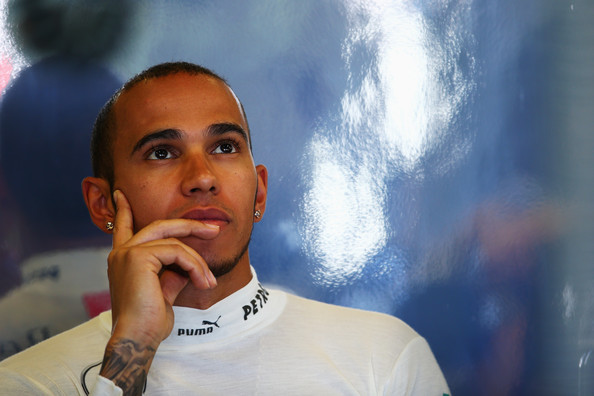 Monaco for Hamilton was bittersweet. a podium was in the cards until Ross Brawn intervened.

It was a master class operation of team work and orchestration from Ross Brawn, in my opinion the best strategist in Formula One currently. The strategy calls he came up with during his time at Benetton and in the Ferrari years with Michael were just unbelievable. Those strategyies made this blogger very annoyed due to the fact that I liked Damon Hill and later Mika Hakkinen. I can’t begin to describe how many times I thought the race was in the bag for my driver only to end up with Michael doing his crazy fist pumping jump on the top step. The absolute frustration!! Surely some of Michael’s 91 victories are not so much due to his driving skills, but rather Ross’s skills in regards to strategy and perfect execution.

Sunday was no different. Slightly caught out because of Felipe Massa’s accident, the Mercedes principal needed to create a cushion for Rosberg to ensure he stayed in P1 after being serviced in the pits for presumably his only pit stop of the race. The Red Bulls had already made their stops, so Mr. Brawn needed a plan and quick.

Enter my conspiracy theory, in the form of Hamilton, the second Mercedes and some team orders. Remember those? Those radio transmissions that get everyone’s carbon fiber all in tatters? Yes, there most definitely must have been one of those transmissions even though the FIA and Race Control did not allow us to hear it. Curious, don’t you think? Maybe the FIA did not want a repeat of the Malaysia drama, with team orders. Maybe it was that transmissions are randomly chosen and that one was not. Maybe with all of the problems F1 is having concerning Pirelli everyone just thought why add gasoline to the fire? Whatever the reason, the team order must have existed, because on lap 29 Hamilton was only 2.9 seconds behind Rosberg. On lap 30 or so when Rosberg pits, no Hamilton in sight.

Liegh Diffey, the announcer for NBCSN,  mentions as this is all going down that Hamilton has pushed the gap to the Red Bull of Vettel up to ten seconds. There is the brilliance. Ross Brawn knew exactly how much time he needed and how to get the team to execute. The result, great for Rosberg, he exits the pits still in first position but for Hamilton, not so great. When he finally rejoins it is at the expense of his original position, second, and now he is in fourth behind the Red Bulls of Vettel and Webber. But as a team, Mercedes has managed to slow down the Red Bulls enough to ensure Rosberg’s victory. 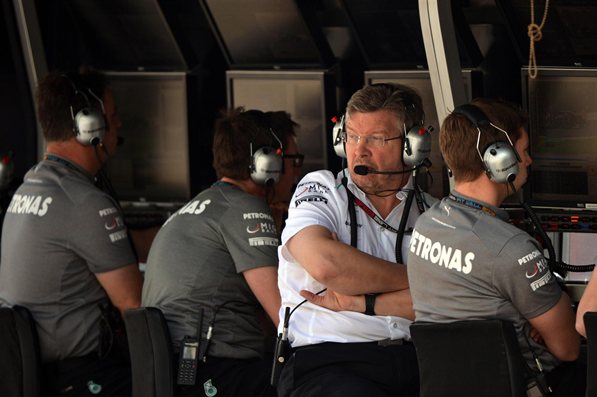 It must have been a little painful for the Mercedes camp. Here is the dilemma, to ensure you stay P1, P2 becomes the sacrificial lamb. There was no way around it. Shame really, what a photo it would have made to see both Silver Arrows crossing the start/finish line one and two. Better yet, to see both drivers on the podium one and two? At Monaco it is not so much a podium as it is a set of steps and the Royal Family is in attendance. Prince Albert II usually hands out the winners trophy and Princess Stephanie has been up there with the drivers in the past . What Monaco lacks in size it makes up for in tradition and elegance. The points earned for the win may be the same as any other race on the schedule but make no mistake, this one counts more. Those are the kind of results boards love, it keeps everyone happy and the money flowing. This kind of racing makes it all worth while, if you are a car manufacturer. But still, the top priority it to protect first place, so sorry Lewis your luck just ran out. (I am making the sound of a lamb in distress).

On the other hand, Mr. Brawn will have thought, this is a nice way to even up the score between his two drivers for what happened back in Malaysia. For what seemed to us fans, (pretty sure Rosberg seemed to share our feelings too), an unreasonable request despite the issues concerning the fuel or lack of it to make it to the end of the race. No matter how one looks at it, this was a win, win, win, for everyone involved. Mercedes wins, literally. Rosberg gets his win, well deserved no question there, and even though Hamilton did not get to the podium, he will have won over many in the team with his maturity and understanding. On this day Hamilton knew it was about something more than himself. Just as it was when Rosberg had to put the Team and Hamilton in front of his own desires back in Malaysia.

This evening of the score will also pay dividends to both drivers and the team. Now everything has been righted and both drivers must feel that the team is treating each with a balanced amount of respect, and that these “Sporting Director” calls from Ross Brawn are indeed about the good of the team, not about favoring one or the other driver.

All in all, I have to say I am very impressed so far with how the dynamic has been playing out at Mercedes. [Side note: We have yet to see how it will all play out with Paddy Lowe, who officially starts work at Mercedes this week. There could still be some fireworks in the making, but lets leave that point alone for now.] You need only look at Red Bull currently or back a few years at the McLaren Hamilton/Alonso days to see how rotten it can become between driver pairings and within the team. Of course there are many more, no recap necessary.

It is still early days at Mercedes with Rosberg and Hamilton. I hinted that after Malaysia there was a good possibility that these two would have a less than a rosy relationship, that there was bound to be some posturing between the two. That Hamilton wanting to establish himself in the team was going to have some kind of negative affect. That Rosberg feeling the pressure was bound to affect his driving. However all is rosy at the moment, and Rosberg went out and won himself the most famous F1 Gand Prix possible. So much for my insight. Lol. 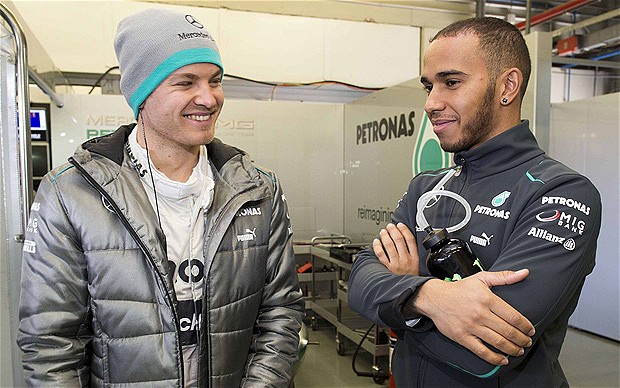 Nico and Lewis. It really does seem that all is well between the Mercedes Boys.

So far, each of Mercedes’s drivers are showing that it is possible to have a harmonious relationship and still race hard and that you can run a team without number one and and number two statuses. We have 13 races to go and F1 being F1, and drivers being drivers, anything can happen. Rosy one day, thorny the next. It can all change in a race weekend, which means an instant. But lets leave that one alone as well right now.

Rosberg won the prestigious Monaco GP but Hamilton is ahead in the Drivers Championship. That’s pretty even. Two drivers, both very skilled and both have something to brag about. Now if Ross and company could just get the tires to be as harmonious with the W04 chassis everything would be perfect.

-jp- (and I can just about see those black ‘copters now)

← Ferrari Where Did It All Go Wrong?
The Americans Are Coming (To F1 That Is) →

2 Comments on “Hamilton, The Safety Car And Payback”