Vettel Whips The Competition, Alonso Loses Ground, Hamilton Shows Why He’s Worth It. And The Buddha…

Lewis Hamilton produced the highlight of the race in my opinion. Ross must be very please to have the World Champion on board for this year.

I have said this many a time, I will never just blog, that is not my intent nor does it make for anything interesting. So I normally stay away from recapping a race. I am however going to say a few words (yeah right, when has that ever happened) about the Grand Prix of Bahrain that I think are worth mentioning.

As impressive as Alonso was last weekend, Vettel was equally sensational this past one. From the repass on Alonso after the first couple of laps to controlling the race, Vettel did not put a wheel wrong. My dad would always say, give credit where credit is due. Vettel and Red Bull deserve all the credit for Sunday’s win.

You have to always admire athletes, teams, politicians (even though some are scoundrels), businessmen, anyone really, who, when their chips are down, backs are against the wall, can turn around a setback, disappointment, mistake, a gross error, a miscalculation of judgment. Alonso and Ferrari did just that with a win last week after a horrible gamble in Malaysia. Now Red Bull pulled out the same feat.

With everything that Vettel and Red Bull have endured in the season already (and we are only 4 races in people) this speaks volumes about their resolve and tenacity. I have never hid my lack of enthusiasm for Vettel; I like the guy with the big eyebrows in the red car. I am not the kind of journalist that reports in a balanced way. I am 100% biased, oh and by the way I’m not a journalist. I am just some guy that loves this sport so much I started my own blog. And what I love the most about F1 is how everyone has to perform at the highest level, all the time, in every aspect, in all places. 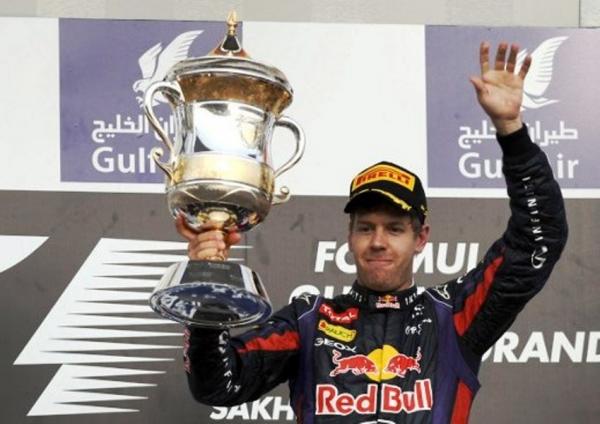 Sebastian Vettel wins the Bahrain GP. What a way to come back after the misery of China. Well done.

That, to me, is what makes F1 so awesome. Think of a diamond. It can be cut perfectly in all of it’s hundreds of facets, but if one, just one, is not cut as precisely as the rest, the entire stone will falter. F1 is not so different. As much as I wanted to see Fernando on that top step (well any step really), what I loved even more (painful as it is to admit) was seeing how Vettel drove his socks off in the first stint and then controlled the race to the end. The credit is all yours sir.

Moving right along, question to all of you. Has anyone had a DRS wing failure yet? If it has indeed happened, I have absolutely no memory of it. Man, I can’t believe the luck that Fernando has sometimes. I know there is plenty of bad luck that goes around for all the drivers, but it just seems that when Fernando’s comes around, it really borders on rotten. Of course I should keep in mind that he’s 31, makes millions of dollars, travels all over the world, has an insane number of fans, gets to drive a cool red car around on most Sundays and races for the most prestigious marquee in all of racing. Right.

Did I mention that he is only one of a handful of drivers currently that has won mulitple races, not to mention couple of WDC’s? So I guess he is not that unlucky in retrospect.

That being said I guess the carbon fiber lining so to speak, if any, is this. Fernando and Ferrari still finished in the points (4 of them), was only 37 seconds down from the first place car of Vettel despite having to make two unscheduled pitstops, and managed to finish in front of most of the field.  Sunday also confirmed that the F138 is fast, well balanced and will yield more results as Ferrari fine tune it.

If nothing else, like all great drivers having to rebound from some issue or problem in a race, (17th place in this case) Fernando’s drive was that of a champion. In situations like this, what’s done is done, there is nothing you can do about it, and there is really no sense in getting all out of sorts. You just keep you foot in it, drive as hard as you can and see where you finish. So well done Fernando.

Fernando Alonso – Qualified well on Saturday and feeling very good about Sunday. If only he knew…

One last thought on this. It seems to me that there are really two places that show the talent of a real champion in a driver. One is at the front and having that killer instinct to stay there and the second is at the back, and hauling yourself up no matter what the circumstances are. Fernando has been in both positions in the last two weekends. For that matter so has Vettel.

How could I not mention Hamilton. Due to a bad qualifying session and a penalty he starts 9th on the grid, has a quiet race for most of the 57 laps, and then comes alive in the final stint finishing off in a great battle with Mark Webber for 5th.

For me, this was the highlight of the Grand Prix. This is the type of wheel-to-wheel racing that I grew up with as a kid and what us fans all too often don’t get enough of. Hamilton’s last laps speak for themselves, he showed everyone on Sunday why he is a champion and worth every penny that Mercedes is paying him and why he was pursued by the likes of Niki Lauda and Ross Brawn.

I only want to say this, big ups to both of these drivers Hamilton and Webber, for racing in a manner that you cannot help but have the ultimate respect for. Driving hard, not taking each other out. The sequence of laps that those two put together was some of the finest driving I have seen in a while.

A little further back there was also some wheel-to-wheel racing or at the very least some wheel to front wing racing. I relished the battle between Sergio Perez and Jenson Button as well. Not quite sure why Button is so irate.

Quick note: Jenson, stop complaining and drive faster. Your radio transmission “tell him to calm down” referring to Perez, reminds me of Brazil 2009 whey you were complaining about Kamui Kobayashi in the Toyota and how you could not get by, which was a must for your championship at the time.

Jenson, here is the job description just in case you missed it. The driver behind is to throw everything and the kitchen sink at you to get by, it is your job to throw everything and the kitchen sink, plus the fridge, and the dishwasher back, to make sure he doesn’t. If what you said about that type of racing not being the kind that you want to be in, then I am not to sure this is the formula for you.

Lastly, I would like to quote the first of the four noble truths.

Life means suffering. To live means to suffer, because the human nature is not perfect and neither is the world we live in. During our lifetime, we inevitably have to endure physical suffering such as pain, sickness, injury, tiredness, old age, and eventually death; and we have to endure psychological suffering like sadness, fear, frustration, disappointment.

Let me add to that. The suffering of having to wait 20 days, 5 hours, and well you get the point… Until the next race.

To wait until Ferrari and Alonso get the chance again to put it all together, make the right call on setup, and strategy, react to all variables and reach the top step, show why they have been champions in the past and will be champions in the future.

2 Comments on “Vettel Whips The Competition, Alonso Loses Ground, Hamilton Shows Why He’s Worth It. And The Buddha…”