Close Racing, There Is Nothing Better 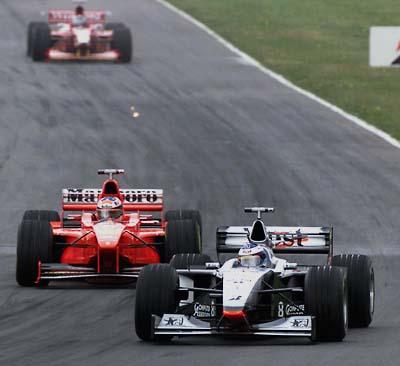 HERE WE ARE BACK IN 1998, GRAND PRIX OF ARGENTINA. MICHAEL IS SHOWN IN SECOND HERE BUT WOULD FINISH IN FRONT OF MIKA’S MCLAREN FOR THE TOP SPOT.

I just watched the GP of Germany for a third time and I can’t help but be reminded of the close racing between Michael and Mika back in 98/99. Aerodynamics have always been important, but this was before the absolute dependence that we now see in Formula One on downforce and the complex solutions that engineers have developed that get bolted on the car almost every other weekend. I’m not an engineer so my insight on the tech side of F1 is limited, but as I think back to this time, there seemed to be less aero dependence and more emphasis on the chassis and the driver. In this particular year it appeared that the cars of Ferrari and McLaren were evenly matched and it really did come down to the drivers, the team, the strategy, and the pit work.  And if my memory serves me, it went back and forth between these two all season long with the championship not being decided until the last race at Suzuka one year. Michael broke his leg in the other year and Eddie Irvine was left to challenge Mika but he was never really going to take the championship.

I have fond memories of the battle royales: Mika vs. Michael, Ferrari vs. McLaren, Denis vs. Todt, Newey vs. Byrne. Unlike last year, or for that matter the year before, when it was a forgone conclusion which car was the fastest, in 98/99 you just could not predict which driver or team was going to come out on top come Sunday. I feel that this closeness could be due to the fact that this was the go-go era of testing. All teams had a comprehensive test team. To give you an idea how well funded these test teams where and how large of an operation they had become, I think Ferrari racked up 60,000 km one year in pursuit of the drivers championship which had eluded them for a significant period that turned into a 20 year slump until Michael won it for them in 2000. Today the teams can only evaluate their new components for one day, the Friday practice before the Saturday qualifying, then look at the data and decide if it worked or not. Back in 98/99 if a part, wing, turning vane, suspension link, etc. made it’s way onto the car for Sunday there was no question mark about it’s performance or durability, for it more than likely had already done two or three race distances during testing. This was also the high point of team budgets and they were way out control with Ferrari leading the way. Alas, it could not go on and the FIA slowly but surely put the kibosh on runaway spending (this is an ever present issue with the teams and the sponsors, and one that is under constant scrutiny due to the difficult economic climate). However it did produce some incredible advancement in equipment and some great racing. This could have been the reason that racing was so close those two years, or not, maybe it was just great driving. More than likely it was a combination of both and just the way Formula One has been for some time. Seems to me more often than not there are always two constructors going at it tong and hammer, each pushing the other to the maximum and best effort to the benefit of the fans.

Racing like this is quite obviously fantastic and compelling and of course it is exciting. But there is something else going on as well and that is the necessary element of high-pressure, mistake-free driving needed to win. It is the perfect drive, perfect pit work and perfect strategy that really make the difference when the margin is so small as it was in Germany. Of course these elements are always important, but in this particular era Bridgestone produced great tires, no drop off, very consistent; the exact opposite of what the FIA requested from Pirelli. So the only real way to pass a driver in front of you if your car was equal but not faster was to do it through the pit rotation.  And that meant two or three stints driving with low fuel, qualifying-type laps, and basically driving the car as fast as it could go. And so it went, one race Michael would start from pole but would lose the lead to Mika in the first round of stops and Mika would in turn lose it to Michael at the next round of pit stops, or Mika would keep it till the checkered flag. And this process would be repeated at the next Grand Prix with Michael the one who got the better of Mika by race end despite the Finn starting from pole. It was great stuff.

CLOSE RACING 2012 STYLE, ALONSO’S HAD COMPANY THE ENTIRE RACE; HIS PURSUERS CHANGED FROM VETTEL TO BUTTON FOR THE LAST STINT.

So here we are in the present and the last time I witnessed a race where first and second were separated by a second or less for almost the entire race was 10+ years ago. I forgot how on the edge of your seat this kind of racing could be. One little slip up if you are in P1 and puff, you are now in P2, maybe P3. It was a brilliant drive by Alonso and a great team effort from Ferrari. In this post post modern day of F1 with DRS, needing to harvest KERS in different parts of the lap, constantly having to change the brake bias, shifting up and down through the gear box over 100x per lap, having to look in your mirrors constantly, hitting the entry, apex and exit just right, having to correct mid-turn, and also lapping back markers, not to mention having to look after this new type of wear-out tire, it is just incredible what we now ask of a Formula One driver. And they must be driving right at the limit while doing all this.

I hope in the second half of the season we see some more racing like this. Don’t get me wrong, all Formula One races are exciting in one way or another and there is always some close racing in the mid-field, but when it is up at the very front and it is this close, it just is so much better than anything else I know … especially when your guy comes out on top, dontcha know?!!

← Hungary: Hamilton’s Back, Lotus Delivers, Alonso Up
A New Wife, A Honeymoon, And A Grand Prix (Part One) →

3 Comments on “Close Racing, There Is Nothing Better”